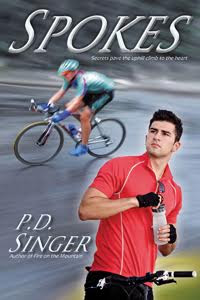 Every Wednesday, I put on my pimp clothes (you should see me!) and help promote the new or old work of some of my favorite fellow authors. Be sure to stop by every week and see what’s new. This week, I’m all about SPOKES by PD Singer.

Here’s what PD Singer has to say about SPOKES:

My husband is a distance cyclist: his road bike has pride of place in our dining room over the winter because temperature fluctuations in the garage aren’t good for it. He eats, drinks, and breathes bicycle racing too, so I get to watch the Tour de France coverage in its entirety, and often with more than one repeat in the day. I haven’t dared tell him about streaming coverage of the entire racing season on the internet, because then I’d never see him. Sooner or later, I had to write a book about cycling. Besides, who can resist fit guys in Lycra?

Speed is important, and so is stamina, but strategy is the third leg of the winning tripod. That’s what I wanted to focus on, not only as part of the race, but as part of Luca’s life. Christopher’s understanding, or lack thereof, of the challenges Luca faces drives the book. Christopher’s a neophyte in the strategies Luca’s using to plan his future, and their mismatch of expectations kept me with them on and off the bike.  The climactic race in Spokes is not the Tour, but the Giro d’Italia, an equally import stage race, if less well known in the US, and no, I won’t tell you if Luca wins. The Giro is frequently run over some atrocious-by-any-standards roads, unlike the Tour, where the asphalt generally slants in only one direction.

As I write this, we don’t know who will win the Tour. Alberto Contador won the 2015 Giro and (at this moment, possibly not when you read this) is in contention for the Tour, which is a marvel of conditioning. Luca would be a contender, and Christopher yearns to write up the results for CycloWorld. To let you share the cycling love, Spokes is on sale for 99 cents through August 2. Enjoy the ride.

BLURB
Pro cyclist Luca Biondi lives for the race. For the star of Team Antano-Clark, victory lies within his grasp—if he can outdistance 200 other hopefuls, avoid suspicion from race officials, and keep his lieutenant more friend than foe. Luca also has secrets, and eyes for amateur cyclist and journalist Christopher Nye.

Christopher understands Luca’s need to keep their relationship under wraps, but chafes at hiding in the shadows of his lover’s career. He’s ready to cheer Luca’s victories, but he knows too well how triumph can turn to tears. While Christopher’s heart sees Luca the man, his inner journalist—and his editor—sees the cycling world’s biggest scoop.

From the jagged curves of the Colorado Rockies to the viciously steep Belgian hills, Luca can ride out any bumps—except rumors.

A few words in the wrong ear could crash everything. With miles between them, hints of scandal, and Luca’s fierce need to guard his reputation, a journalist might have to let go of the biggest story of his career or risk forcing his lover to abandon the race. Christopher and Luca face a path more treacherous than any road to the summit in the Italian Alps.