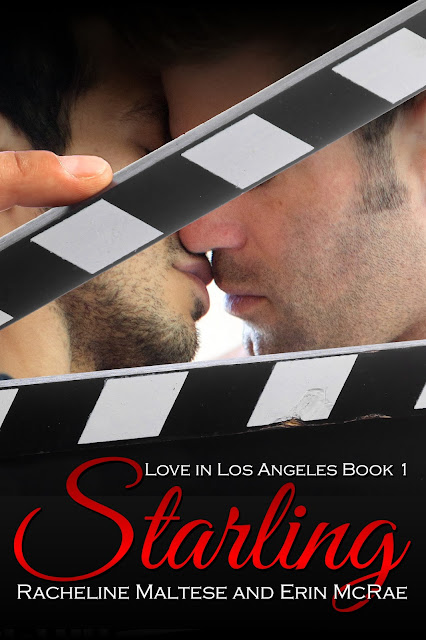 Every Wednesday, I put on my pimp clothes (I favor feathered hats and zebra prints
with a little crushed velvet) and help promote the new or old work of some of my favorite fellow authors. Be sure to stop by every week and see what’s new.

This week, I’m all about Starling by Racheline Maltese & Erin McRae.
Here’s what the authors say about "Starling:"

Starling was inspired by a question, and then by our own fascination with the unglamourous parts of fairy tale of fame.

Racheline and I started writing together more or less by accident. We met through mutual friends and share loves of television, backstage stories, and romances that are a little dark and a little messy.

But loving backstage stories when one of you is a SAG-AFTRA actor and the other has a long history of working crew in school shows can be hard.  There’s so much to fantasize about, people don’t always get the reality right.

But what if? We asked each other. What if a guy who never wanted to be famous, became famous? And then, email by email, we started telling each other a story. And once we started, we didn’t stop.  A year later, we’ve sold two novels -- including Starling -- a short story, and a novellete, have a half-dozen projects currently in progress, and several currently out with publishers for submission.

For Starling and its sequels - Doves, Book 2, and Phoenix, Book 3, are now also available from Torquere Press -- we wanted to tell a story about the wonder and the terror that is fame. Starling may be a fairy tale -- that discovered in a diner narrative always is. But it’s not a the Disney fairy tale. Rather, it’s much more Hans Christian Andersen or Brothers Grimm.

Since Starling is a contemporary romance, it’s not that there are monsters lurking under the bed, but we are huge fans of magical realism and wanted to see how we could bring those ideas to a story, both magic and real, set in Hollywood.

As Alex, our guy who becomes famous, and Paul, the guy he falls for, navigate their way to their happy ending, things are hard and occasionally dark. Because life, after all, isn’t easy, and fame and success don’t make figuring out how to get, and keep, what -- and who -- you want any easier.
BLURB
Be careful what you wish for...

When J. Alex Cook, a production assistant on The Fourth Estate (one of network TV’s hottest shows), is accidentally catapulted to stardom, he finds himself struggling to navigate both fame and a relationship with Paul, one of Fourth’s key writers. Despite their incendiary chemistry, Alex’s inexperience and the baggage they’re both carrying quickly lead to an ugly break-up.

...Because the stars aren’t benign.

Reeling from their broken hearts, Alex has an affair with a polyamorous co-star and Paul has an ill-advised reunion with an old flame. Meanwhile, the meddling of their colleagues, friends -- and even the paparazzi! -- quickly make Alex and Paul’s real life romance troubles the soap opera of the television season.

But while the entertainment value may be high, no one knows better than Alex and Paul that there are no guarantees when it comes to love in Los Angeles.
BUY
Amazon
All Romance
Barnes & Noble
iTunes
Kobo
Publisher

AUTHOR BIOS
Erin McRae is a queer writer and blogger based in Washington, D.C. She has a master’s degree in International Affairs from American University, and delights in applying her knowledge of international relations theory to her fiction and screen-based projects, because conflict drives narrative.

Racheline Maltese lives a big life from a small space. She flies planes, sails boats, and rides horses, but as a native New Yorker, has no idea how to drive a car. A long-time entertainment and media industry professional, she lives in Brooklyn with her partner and their two cats.

Together, they are co-authors of the gay romance series Love in Los Angeles, set in the film and television industry -- Starling (September 10, 2014), Doves (January 21, 2015), and Phoenix (June 10, 2015) -- from Torquere Press. Their gay romance novella series Love’s Labours, set in the theater world -- Midsummer (May 2015), and Twelfth Night (Fall 2015), is from Dreamspinner Press. They also have a story in Best Gay Romance 2015 from Cleis Press and edited by Felice Picano. You can find them on the web at http://www.Avian30.com.