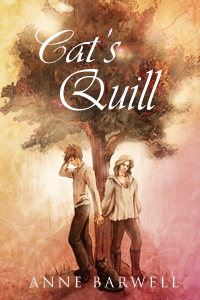 Every Wednesday, I put on my pimp clothes (I favor feathered hats and zebra prints

with a little crushed velvet) and help promote the new or old work of some of my favorite fellow authors. Be sure to stop by every week and see what’s new.

This week, I’m excited to introduce you to Cat's Quill by Anne Barwell. Here's what Anne has to say about her story:


"Cat’s Quill is not only the first book in my Hidden Places series, but it’s also my first published book so it holds a special place in my heart.
I’ve always loved reading fantasy in which characters from our world find themselves in another, and vice versa.  The ‘fish out of water’ scenario is appealing not only because the character must find his way through an unfamiliar world, but because it also gives the opportunity for commentary on our own from a different perspective.

"One of the themes in Cat’s Quill is the definition of reality. Are fantasy stories based on reality, or are they the product of a writer’s imagination?

"Tomas, one of the main characters, is a writer, and it was fun to explore some of his inner dialogue and the concept of having a muse.

"It’s also a story within a story in more ways than one.  Tomas is obsessed with finding a sequel to a book he read years ago, but has had no luck finding the author or the book. However, he is certain that the story is not finished.  When he arrives in Oakwood he meets Cathal who provides clues to what Tomas is looking for, but surely they can’t possibly be true?


"Early on I decided to write the whole book from Tomas’s point-of-view. This isn’t something I usually do, but it was important that the reader find out the truth as Tomas does step by step.


Unfortunately Tomas’s time in Cathal’s world is limited as escape from there is a priority so I didn’t have the opportunity to show as much as I would have liked of that society.  There are more hints in book 2—Magic’s Muse—as Cathal must reconcile his old life with his new one in Tomas’s world. Most of the storyline in the final book of the series will take place in Cathal’s world where battles will be fought and life-changing decisions will be made in an action packed conclusion called Dragon’s Price."

Tomas Kemp has two successful novels to his name and the true belief that a successful sequel is only a matter of a little inspiration. When Tomas meets a mysterious stranger under the branches of an old oak tree, he feels compelled to tell him about a book he holds dear and the sequel he wants to read. But Cathal doesn’t share that deep belief that the sequel Tomas seeks ends happily. Cathal has seen enough of a world where stories are real to know that happy ever after is sometimes the dream that won’t come true.

Anne Barwell lives in Wellington, New Zealand.  She shares her home with two cats who are convinced that the house is run to suit them; this is an ongoing "discussion," and to date it appears as though the cats may be winning.

In 2008 she completed her conjoint BA in English Literature and Music/Bachelor of Teaching. She has worked as a music teacher, a primary school teacher, and now works in a library. She is a member of the Upper Hutt Science Fiction Club and plays violin for Hutt Valley Orchestra.

She is an avid reader across a wide range of genres and a watcher of far too many TV series and movies, although it can be argued that there is no such thing as "too many." These, of course, are best enjoyed with a decent cup of tea and further the continuing argument that the concept of "spare time" is really just a myth.

Anne’s books have twice received honorable mentions and twice reached the finals in the Rainbow Awards.