No, smart ass, these are not books that are attracted to other books.

These are books that have gay people and/or gay themes in their stories. It was a tough job to narrow them down to a mere 10. When I move, the worst part of it is packing up and moving all the books. I am buried under books. I have read more books than I can count.

I am a true book slut, moving restlessly from one to the other, finding satisfaction here, disappointment there…and sometimes magic.


So, I used the following criteria for this list. First, and most obviously, I wanted my choices to at least reflect gay themes, even if only in a tangential way. Second, I wanted to be spontaneous and simply give you the very first books that came to mind when I thought of my very favorite “gay” books. I’m a great believer in going with one’s gut. So here they are (in no particular order):

1. Strangers on a Train by Patricia Highsmith. Highsmith has long been one of my literary icons. When it comes to probing the darkest sides of human nature, no one does it better than she. Strangers on a Train is a much better novel than the Hitchcock movie of the same name (although that was not without its charm, among them the very lovely Farley Granger) and has a much darker resolution. Its homoeroticism, too, is much more explicit than in the sanitized Hollywood film that bears the same name.
2. The Front Runner by Patricia Nell Warren. How many other gay men have had the same experience as I did? I discovered this book on a trip to the mall when I was in high school, surreptitiously bought it when my friend wasn’t looking, and took it to home, hid it between my mattress, and box springs…and absolutely treasured it. It opened my eyes to so much (yes, two men can really love each other—it’s not a sickness or an abnormality) and made me realize I was not alone.
3. No Night is Too Long by Ruth Rendell (writing as Barbara Vine). No contemporary mystery/psychological thriller writer does it better than Ruth Rendell. She plays with gay themes in several of her novels, but in this tale of psychological suspense, she most successfully blends homosexual themes and characters with heart-pounding suspense and shines a light into our darkest fears and compulsions.
4. Mysterious Skin by Scott Heim. This was Heim’s debut novel and it’s weird, wonderful, and disturbing, combining alien abduction, memory loss, and child sexual abuse in a compelling, lyrical, and thought-provoking narrative. I’m sad to say that none of his subsequent work had the sheer power of this one.
5. In a Shallow Grave by James Purdy. Purdy is one of the most underrated American writers. I believe he is one of the masters of 20th century literature and this gem, about a disaffected and disfigured war veteran and his love for a hired male caretaker and the fugitive who comes into both their lives is spiritual, carnal, and profound. And Purdy’s command of the language and his use of American colloquial speech is nothing short of poetry.
6. The Line of Beauty by Alan Hollinghurst. A perfectly rendered portrait of England in the 1980s and the rise of the new right, this story about young gay Nick Guest and his social and sexual awakening is harrowing stuff, since we know that tragedy lurks just around the corner for not only our naïve young—and often selfish—protagonist, but for a whole segment of society.
7. Was by Geoff Ryman. This revisionist take on my favorite movie of all time, The Wizard of Oz, is simply brilliant literature. In its parallel stories of a “real” Dorothy Gale, a “scarecrow” dying of AIDS, and the plight of a child star named Frances Gumm combine to form a narrative that is nothing short of literary brilliance.
8. Michael Tolliver Lives by Armistead Maupin. The Tales of the City books, like The Front Runner, were eye-openers and touchstones for me as a young gay man coming to grips with his own identity. Reading this last entry in the series really resonated with me and touched me, since I am not far behind Michael himself and have experienced many, if not most, of his same joys and sorrows.
9. The Lost Language of Cranes by David Leavitt. This was Leavitt’s first novel and, while I wouldn’t say it’s his best, I would say it’s his sweetest and most satisfying. So much of the story resonates with me personally (the closeted father with a gay son) that it simply touches my heart more than his other work.
10. Raining Men by Rick R. Reed. You didn’t think I’d compile this list without putting myself on it? But people always ask which of my books is my favorite and this one is clamoring for a mention. I love it because it shows, perhaps more than any other book I've written, the power of love for redemption. 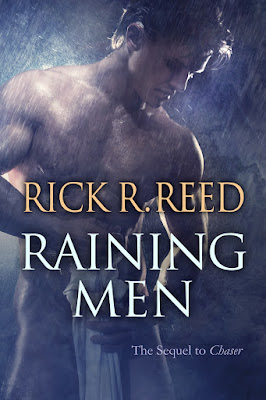 It’s been raining men for most of Bobby Nelson’s adult life. Normally, he wouldn’t have it any other way, but lately something’s missing. Now, he wants the deluge to slow to a single special drop. But is it even possible for Bobby to find “the one” after endless years of hooking up?

When Bobby’s father passes away, Bobby finally examines his rocky relationship with the man and how it might have contributed to his inability to find the love he yearns for. Guided by a sexy therapist, a Sex Addicts Anonymous group, a well-endowed Chihuahua named Johnny Wadd, and Bobby’s own cache of memories, Bobby takes a spiritual, sexual, and emotional journey to discover that life’s most satisfactory love connections lie in quality, not quantity.

And when he’s ready to love not only himself but someone else, sex and love fit, at last, into one perfect package.