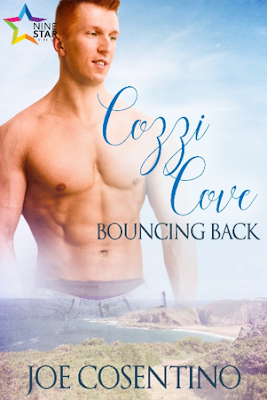 BLURB
On Cozzi Cove at the New Jersey shore, handsome Cal Cozzi’s seven bungalows are open for summer and love. Mario and Harold are brothers and college students who happen to look alike, but couldn’t be more different: Mario is searching for love, and Harold is searching for lust. Josh and Greg, a wealthy older couple, are matchmakers for their son, Christopher. When it comes to Connor, the maid, packed with muscles and a roving sponge, anything can happen. Opposites attract as wild Tim with the secret past meets shy Mark, and porn star Chuck Caliber connects with Sean, a virgin romance novelist. And what will happen when computer-game designer Arthur has a midnight sea rendezvous with a merman? Even married Cal faces an emotional upheaval when a gay bashing turns into something quite unexpected. What secrets and passions lie in magical Cozzi Cove?

BUY
From the publisher
From All Romance


Praise for COZZI COVE: BOUNCING BACK
“I loved this story. It carries you through the full range of emotions, from joy to sadness, from happiness to anger.  The characters are beautifully written. I look forward to a return visit to the Cove.”
--TBR Pile

“Heartbreaking and heartwarming, sweet beginnings for some, sour endings for others, emotions jumping off the page as you turn eagerly to read more, welcome to Cozzi Cove. The author measured his scales to perfection in delivering the perfect balance of love, laughter and tears in this sexy, fun filled holiday romance entwined with some sadness. Summer magic waved it's wand at all who visited and stayed at Cozzi Cove and I was one of those who wanted to stay.”
--Three Books Over the Rainbow


ABOUT THE AUTHOR
Amazon Bestselling author Joe Cosentino wrote Cozzi Cove: Bouncing Back (NineStar Press), Drama Queen and Drama Muscle Nicky and Noah mysteries (Lethe Press), An Infatuation, A Shooting Star, A Home for the Holidays, The Naked Prince and Other Tales from Fairyland (Dreamspinner Press), Paper Doll and Porcelain Doll (Wild Rose Press) Jana Lane mysteries, and The Nutcracker and the Mouse King (Eldridge Plays and Musicals). He has appeared in principal acting roles in film, television, and theatre, opposite stars such as Bruce Willis, Rosie O’Donnell, Nathan Lane, Holland Taylor, and Jason Robards. His one-act plays, Infatuation and Neighbor, were performed in New York City. He wrote The Perils of Pauline educational film (Prentice Hall Publishers). Joe is currently Head of the Department/Professor at a college in upstate New York, and is happily married. His upcoming novels are Cozzi Cove: Moving Forward (Nine Star Press), Drama Cruise Nicky and Noah mystery (Lethe Press), and Satin Doll and China Doll Jana Lane mysteries (Wild Rose Press). Joe was voted 2nd Place for Best MM Author of the Year in Divine Magazine’s Readers’ Choice Awards for 2015. Find Joe on the web.
Posted by Rick R. Reed at 9:18 AM