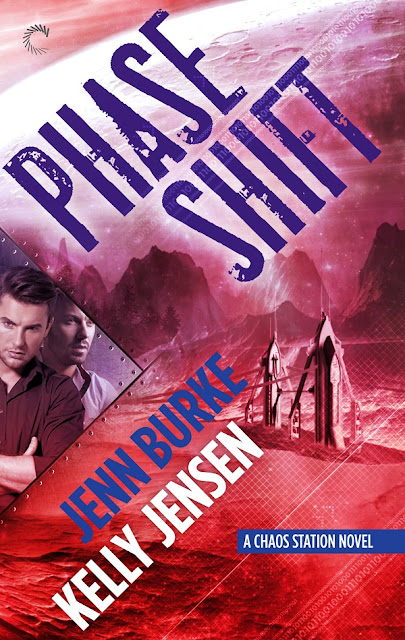 Welcome to my little exploration of love, how people fall in love, what keeps them together, and what keeps them apart. This week, we have Kelly Jensen talking about first love and it's a sweet story. And please read on to check out her new book (with Jenn Burke), Phase Shift!

My first love began and ended rather sweetly. He was someone I knew throughout my childhood, then didn’t see for a handful of years. We caught up again when we were nineteen in a scene that might have been scripted, at a summer party at the house of family friends. I didn’t know he’d be there—he’d been working in a different state, last I heard. Then I saw him standing surrounded by a bunch of the younger kids. This is nearly thirty years ago, but I can remember exactly what he looked like, the angle of the sun, the smell of the flowers and how he looked up and saw me. The whole tingle thing as our eyes met, as we took in our first glimpse of one another as adults—or what we believed was our adult selves at the age of nineteen.

My sister came along on our first date. My mother insisted. I thought I’d die of embarrassment, but it turned out to be a very nice evening. We went to the movies and wandered around the city for a while before catching separate trains home. As there had been no kissing (dammit), I figured that would be that. He called the next day to ask me out again. I got to go alone to our second date.

He was my first boyfriend. The first person who told me he loved me. The first person I loved. He used to write me letters, even though we saw each other every week, usually several times a week. He would tuck them into my pockets, or sometimes mail them to my house. I kept every one and reading them still makes me smile. When he wanted to do what grownups do, and I told him I wasn’t ready, he waited. When I was ready, he was so damn sweet about it all. He bought me roses the next day.
He became my best friend and over the course of nine months, we did everything together. We never talked about our future, though. We were nineteen, heading toward twenty, and very aware of the fact our lives were as young as we were. Maybe that’s why we parted as friends.

Our breakup was very undramatic. I remember it almost as clearly as I remember that summer party. We were on a train, heading back to his parents’ place after another day out together. I don’t recall who started the conversation, but I know it was very practical and peaceful. We acknowledged that something had changed. Maybe we’d spent less time together, or we’d begun to pursue separate interests. I was looking into changing colleges and he wanted to change jobs. We were holding hands, and when he said “the magic is gone,” my heart didn’t break. I could only agree with him. Hold his hand a little tighter—and then let go. I didn’t love him any less, but I didn’t need to know him as desperately as I had nine months before.

Looking back, I’m glad we didn’t cling and try to make it work. If we had, he might not still be one of my oldest, dearest friends. Yes, I still know this person. We’re still in touch. We’re both married to different people now, to our lasting loves. The ones we were able to grow with. But I am forever grateful to still have this guy in my life—for the many firsts we shared and for the friendship we have enjoyed since then.

In the Chaos Station series (co-written with Jenn Burke), Zander is Felix’s first love. He believes Zander is his only love, but life separates them for long enough for Felix to grow into the adult he needs to be in order to properly make that decision. Felix would tell you he didn’t need that time; that he found it painful in the extreme to be parted from Zander for nearly fourteen years. I can’t say they might not have worked through the ups and downs presented by ordinary life, let alone the more drastic consequences of war. What I do know is that the bond these guys form throughout the Chaos Station series is both deepened and tempered by their separate experiences. They learn to love the other for who they are now, rather than who they were, or wanted the other to be.

PHASE SHIFT
Book five of Chaos Station
Zander and Felix’s relationship has always pushed boundaries—personal and professional alike—but their love and commitment is stronger than ever. So strong that Zander’s ready to ask commitment-shy Felix the question of a lifetime when he’s interrupted. The Chaos is being hacked, and crucial, top secret information about the project that created Zander—and his fellow super soldiers—has been leaked.

Neither man could have expected the enormity of what’s discovered at the end of the data trail: an entire colony of super soldiers run by the very doctor who changed Zander’s life forever. And now she needs them both—Zander to train her new crop of soldiers, and Felix’s new crystalline arm to stabilize their body chemistry.

With help from the unlikeliest of allies, Zander, Felix and the Chaos crew must destroy the project and all its ill-gotten information. But when the team is split up and Felix is MIA after a dangerous run, galactic disaster is a very real possibility…and Zander may have missed his chance to ask for forever.

ABOUT KELLY
If aliens ever do land on Earth, Kelly will not be prepared, despite having read over a hundred stories of the apocalypse. Still, she will pack her precious books into a box and carry them with her as she strives to survive. It’s what bibliophiles do.

Kelly is the author of a number of novels, novellas and short stories, including the Chaos Station series, co-written with Jenn Burke. At lot of what she writes is speculative in nature, but sometimes it’s just about a guy losing his socks and/or burning dinner. Because life isn’t all conquering aliens and mountain peaks. Sometimes finding a happy ever after is all the adventure we need.