Hello and thank you Rick for hosting me today. The first chapter of Ringed Love is posted on Dreamspinner Press, so over the next two weeks I’ll be offering the first one hundred or so words of each subsequent chapter. This post is also part of Rick’s Love Stories series.

My series, Sentries, tells the story of one couple, Todd and Nick Ruger. They are hunters of the supernatural and protectors in a post-apocalyptic society. Together they face down a number of adversaries from ghosts to demons to mythological creatures.

However, that part of the tale is secondary to the real story: the love between Todd and Nick. A line that’s repeated by one or both of the men in each book is “we’re in this together”.

And they live what they preach.

When the series begins Todd and Nick are young men who are forced into a sort of arranged union. Each book tells part of the story of their lifelong love with a backdrop of political intrigue, war with preternatural foes and meddling people. Ringed Love is the final installment in the series, wrapping up all the story lines.

While writing each book I wanted to keep the love between these two men at the forefront, but it had to grow over time. As the series progressed, Todd and Nick’s lives and how they related to each other changed. They grew up, grew older and became more comfortable with themselves. All couples go through ups and downs, some survive those trials, some don’t. I wanted to be sure Todd and Nick’s love matured, flourished and survived. At first when their union is new, it’s exciting and there is a lot of exploration between them. Since the series covers their lives from their twenties until they’re very elderly their marriage changes with each life stage. I think their most important quality as a couple is they accept each other without judgement or reservation. Each man appreciates the good and doesn’t dwell on the bad in his partner. Last, but certainly not least, they have a healthy, active physical relationship. Todd and Nick do those little things physically, such as hugging, kissing and hand holding often. As they mature they learn the value of forgiveness and honesty in a relationship.

Throughout the chapters of Ringed Love there are a series of events spanning five decades of the Ruger’s lives. In each chapter they face another challenge. Their key to lasting love is shown during highlights, time and again they continue to put each other first. Love, real lasting love takes work and a lot of it. Lasting love is dealing with what life hands out together as a partnership. It’s also taking time out to appreciate the little things and to think about how lucky you are to be in this ride called life together. 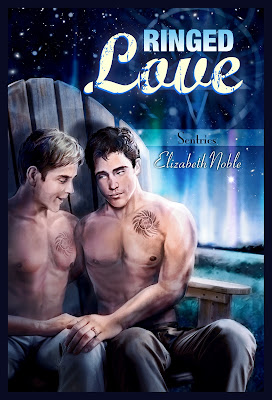 Today’s excerpt is from chapter 9

Of all the creatures supernatural and natural Todd Ruger had hunted in his life, perhaps the most disturbing were Windigos. He wanted this done and behind him and couldn’t get out of there fast enough. A shiver crawled up his spine and made the hair at the base of his neck bristle and his skin tingle.

Nick turned and looked behind them as they rode. Todd glanced sideways at Nick and shook his head slightly, then shrugged as if trying to shake some invisible invader from his shoulders. The night was quiet, with the only real noise being the steady clip-clop of their horses’ hooves on the road. Off in the distance a dog barked.

New Colorado Protectorate fell with the assassination of Chancellor Clarke. Like many others, Todd and Nick Ruger left the land of their birth and made a home to the north in Yellowknife. Their world was ever changing. The time came to say a sad farewell to some of their friends and loved ones, but they were taken in with open arms by others and in turn offered shelter to yet more. Through the years they remained steadfast in their duty as sentries to protect and defend those that needed it the most.

Time marches on but through it all they hold each other dear and cherish the love they’ve shared. There are still angry ghosts, Windigos and water spirits to contend with. Their lives change, offering them new roles. When the time comes, they do what sentries have done for generations prior and teach others the skills to carry on as sentries. The Rugers lives were rich and their hearts full with their devotion and love for each other. The tradition of the sentries lived on forever. It was the legacy of Todd and Nick Ruger. That was the way it was always meant to be.

Elizabeth Noble started telling stories before she actually knew how to write, and her family was very happy when she learned to put words on a page. Those words turned into books and fanfiction that turned into a genuine love of M/M romance fiction. Being able to share her works with Dreamspinner is really a dream come true. She has a real love for a good mystery complete with murder and twisty plots as well as all things sci-fi, futuristic, and supernatural and a bit of an unnatural interest in a super-volcano in Wyoming.

Elizabeth has three grown children and is now happily owned by an adorable mixed breed canine princess and her sidekick, tabby cat.  She lives in her native northeast Ohio, the perfect place for gardening and winter and summer sports (go Tribe and Cavs!) and stargazing all year long. When she’s not writing she’s working as a veterinary nurse, so don’t be surprised to see her men with a pet or three who are a very big part of their lives.

Elizabeth received several amateur writing awards. Since being published two of her novels have received honorable mentions in the Rainbow Awards. Her novel Jewel Cave was a runner up in the 2015 Rainbow awards in the Gay Mystery/Thriller category.