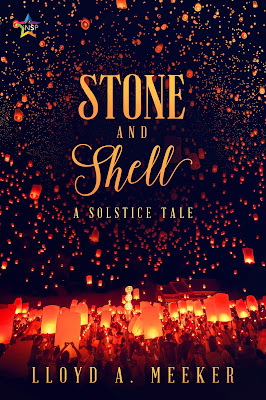 Today, we have a little taste of my friend--and amazing author's--Lloyd A. Meeker's latest release, Stone and Shell: A Solstice Tale. Check out the blurb, enjoy the excerpt, and click on the buy link to get your copy!

BLURB
Eight-year-old Howie Evinger is convinced that his dad would be happier if he found a new husband. Howie would be happier, too. And somewhere out there in the city of Vancouver, there's the right man for his dad to love. But how to find him? That’s a problem, especially if you’re just a kid and your dad says he doesn’t want another husband.

With the help of his quirky aunt who calls herself a Buddhist Wiccan, Howie builds his very own solstice altar with cool symbols to support his search. It has a candle, a feather and a twisty stick, plus an agate for his dad, and a scallop shell for his new husband. Share Howie’s solstice adventure as he learns how real magic requires courage and patience as well as symbols.

Dedication
To the wise and uncertain child in each of us, keeper of the flame of wonder.

Maybe the stone and the shell were too close to the candle. Howie wasn’t sure how this stuff worked. He studied his Solstice altar, made out of a wooden TV tray covered in a piece of dark green cloth. He felt nervous, like sitting in a surprise math test he hadn’t prepared for. He had dreams like that sometimes. He hated math.

If he left his objects too close together, would his wish cover enough territory? Vancouver was a big city. He pushed his glasses back up his nose and frowned. Shanna, who was really his aunt Shannon, even though she didn’t let him call her that, would know how it worked.

She’d taught him about symbols last week, which was a totally cool idea. Then she helped him build his Solstice altar and told him to place his symbols wherever he felt was right for them. The problem was he didn’t know how to place them so his wish, which sat like a giant lump inside him, would come true. It hadn’t occurred to him to ask her about placement rules for wishes.

Dad was working late tonight, and the house was a lot nicer when someone was home already. Back when his dad and Joel were together, they’d had a big Buddha statue, which was the first thing anybody saw when they came in the front door. It was like having a friend waiting for you to come home. Joel had taken it to Toronto with him, and the house felt different without it. He’d told Dad he didn’t mind that it wasn’t there anymore, but he actually did. He didn’t want to be a wuss and complain, though. His best friend, Ricky, was lucky. The Liu family had a gold Buddha set up in their house with all kinds of beautiful stuff around it, even incense. Howie liked the smell, but it made him sneeze sometimes.

Shanna would come soon, and he’d help her get dinner ready. Usually on Dad’s late days, all three of them would eat together, which was nice. It was lasagna tonight, Howie knew, because Dad had made it on the weekend and had frozen most of it for nights like this.

So when Shanna got there in a bit, he’d ask her how Solstice altars worked. She’d know what to do. She’d told him all about Druids and the Solstice and the Celts who were Howie’s ancestors. When he said he thought his grandparents were English, Shanna got a little mad and said just because someone is born in a barn, doesn’t mean he’s a horse. Howie didn’t get it entirely, but he’d stuck with being from the Celts after that.

He was doing pretty well with the altar, as far as he could tell. He’d found objects representing the four forces, which Shanna said every altar needed. He’d found a tiny pure white gull feather with really pretty fuzz near the bottom that moved even when you blew on it just a little. That was for air, and he had a twisty stick for earth. The candle was fire, of course. And then there was water. That part was easy; he already had the little scallop shell and the agate, both from the ocean.

Trouble was, he didn’t want to talk to her about his wish again, or that the stone on his altar also represented his dad, and the shell was a new husband for him because it was smooth and beautiful inside. The shell would hold the stone, and give it a place to be really happy again.

He’d already told Shanna months ago that his biggest wish was for his dad to find a new husband, and she’d kissed his cheek and laughed, her eyes shiny with what he could tell were almost-tears even though she didn’t say so, whispering that was a lovely but awfully big wish for an eight-year-old boy to carry. Howie didn’t mind how big the wish was. He wanted it to come true more than anything else in the whole world.

He pulled the agate pebble back from the candle a little way, but kept it nestled against the shell. Farther from the candle felt right, but the pebble and shell shouldn’t be that close yet. Who knew how far apart they really were? He pulled them apart a few inches, hating the new gap. Even so, the distance felt right. For now. He’d put them closer together soon.