FLASHBACKFRIDAY: Have Dinner at Jack's this Weekend! 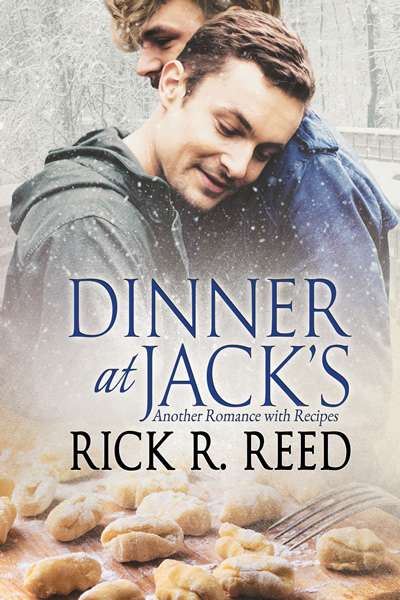 Today, I look back at my novel, Dinner at Jack’s. Like my previous Dinner at Home, it's another romance with recipes. It deals with post-traumatic stress disorder, food, love, and redemption through the latter two. The gorgeous cover was designed by the super-talented Reese Dante.

BLURB
Personal chef Beau St. Clair, recently divorced from his cheating husband, has returned to the small Ohio River town where he grew up to lick his wounds. Jack Rogers lives with his mother Maisie in that same small town, angry at and frightened of the world. Jack has a gap in his memory that hides something he dares not face, and he’s probably suffering from post-traumatic stress disorder.

Maisie, seeking relief from her housebound and often surly son, hires Beau to cook for Jack, hoping the change might help bring Jack, once a handsome and vibrant attorney, back to his former self. But can a new face and comfort food compensate for the terror lurking in Jack’s past?

Slowly, the two men begin a dance of revelation and healing. Food and compassion build a bridge between Beau and Jack, a bridge that might lead to love.

But will Jack’s demons allow it? Jack’s history harbors secrets that could just as easily rip them apart as bring them together.

REVIEWS
It's probably no secret that I really enjoy Rick R. Reed's mad writing skills. For example, Reed's Big Love is one of my 2016 favorites. His latest book "Dinner at Jack's" is in the same vein as Big Love in that it really delves into the two main characters - Beau St. Clair and Jack Rogers - and its conclusion is heartfelt, satisfying and well worth the wait, much like a lovingly prepared home-cooked meal.
GAY BOOK REVIEWS

Storyteller Rick R. Reed wove an intricate tail of of the beginning of the perfect love affair, lost in time and rediscovered in the cobwebs of the mind. He bought Jack out of his reverie and gave Beau a reason to fall in love all over again. Throughout it all, the author continued to entice this reader with delicious meals and recipes that made salivating take on a whole new name.
ALPHA BOOK REVIEWS

Dinner at Jack's is definitely romance, with a major thread of fate interweaving the storyline. However, the side cast had a more romantic bent, which I loved. Beau and Jack had issues to overcome before they could reach romance. The best way to describe the entire novel is to say Beau was like a person holding out their hand, trying to feed a wounded animal. Beau was patient and kind to our wounded Jack.