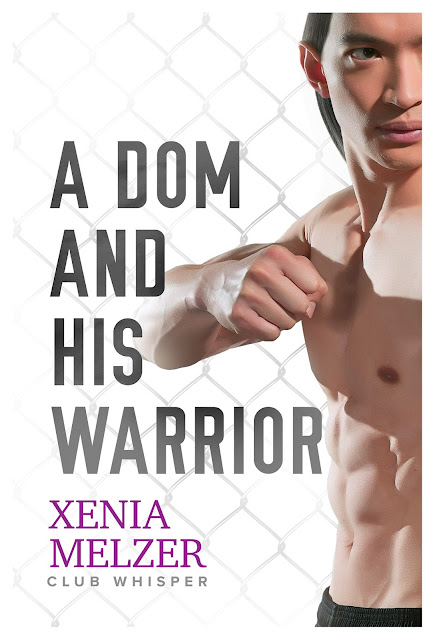 Excited to have fellow Dreamspinner Press author Xenia Melzer answering my impertinent questions on the blog today and to tell us all about her new book, A Dom and His Warrior....


RR: If you could invite any famous person, dead or alive, for dinner, what would you eat?
XM: I would invite Marie Antoinette and have a set of molecule kitchen dishes with her, just to see her reaction.

RR: Who do you think you are?
XM: I actually think I’m several people, of which three come out on a daily basis (mommy, wife, ‘official’ nice-face), while the others (hormonal driven threat to life, sex goddess, natural enemy of all things sweet) only make occasional appearances… Okay, the natural enemy of all things sweet is the most dominant of all…

RR: What’s your problem?
XM: What isn’t? Though my worst problem is grocery shopping, no, make that window cleaning… on second thought, it’s laundry, and cleaning the house, and people at the supermarket who wait for the clerk to pull all their shopping over the beeping machine before they start packing it away.

RR: If you could have one wish, would you give it to me?
XM: Depends on what you would wish for. 😉 If we could agree on trees growing chocolate (70%, dark) we have a deal.

RR: If you had to choose only one vice, what would it be?
XM: I’m a perfect angel! I don’t even know what a vice is! *coughs* Binge eating sweets without gaining weight!

RR: What’s your favorite brand of cereal?
XM:  A tough one. I’m pretty sure nobody knows this brand because it’s a pretty local German producer, but the cereals are great. Seitenbacher.

RR: When you wake up in the morning, what celebrity do you most resemble?
XM: Ozzy Osbourne.

RR: Do you know your ass from a hole in the ground? And if so, how do you tell the difference?
XM: Yes, my ass is way prettier.

RR: Do you have anything you’d like to plug?
PS: How about my newest release, A Dom and His Warrior?

Who is PD Singer?
Xenia Melzer is a mother of two who enjoys riding and running when she's not writing stories. She doesn't like beer but is easily tempted by a Virgin Mojito. Or chocolate. Truffles are especially cherished, even though she doesn't discriminate. As a true chocoholic, she welcomes any kind of cocoa-based delight.

When not writing, playing her fiddle, or skiing, she can be found with a book in hand.

Leeland wants to help his uncle, but he remembers all too well from his years competing in martial arts how strenuous life as an athlete can be. He doesn’t want to risk his relationship with Jonathan. After some discussion, they decide Leeland will go pro for a year.

As if the training and strict diet weren’t bad enough, the pressure skyrockets when Leeland encounters homophobic fighter Tommy Adams—especially when they end up facing each other in the championship

Between the bigoted rants of his opponent, the scrutiny of the media, the pressure from his sponsor, and a fire in his uncle’s gym, Leeland is close to breaking down. Only Jonathan’s support and love keep him focused enough to set foot in the octagon once more—and maybe even walk away a winner.