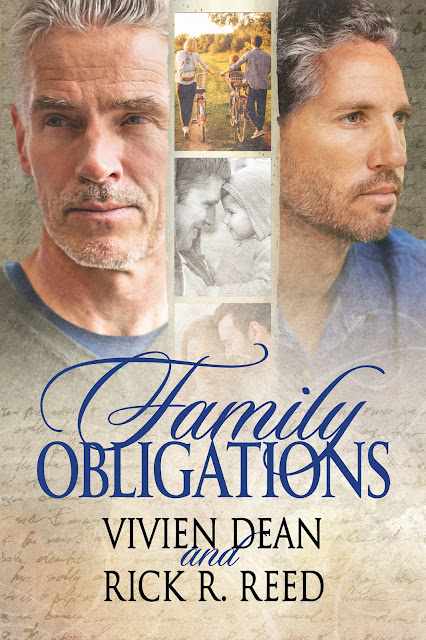 I have long been haunted by one short story, E. Annie Proulx’s beautiful, powerful, and tragic “Brokeback Mountain.”

I remember reading the short story many years ago just after it was published originally in the New Yorker magazine. It stayed with me through all the years, partly because Proulx’s prose is so spare, yet poetic, but also because the story, at its core, could have been mine, since I too was a closeted, married gay man, filled with secret longings and wearing a mask for the rest of the world.
My story (co-written with the fabulous Vivien Dean), “Family Obligations” has a lot in common with ‘Brokeback,’ even though it’s totally different.

It too tells a story about two men who fell in love while young and vibrant, and then, because of their own and society’s constraints, were kept apart through the years. Yet, their love was so strong that they could never manage to break the hold they had upon each other.

BLURB
Tate D’Angelo always thought he knew who his father was: beloved doctor, devoted husband and father…. Everyone at the funeral shared the same glowing stories of a kind soul. So when his father’s old college buddy, Randy, approaches him after the service, Tate expects to hear echoes of the same.

Instead, he gets a lifetime’s worth of letters that tell a different tale and cause him to view his father—and his family—in a whole new light.

The truth, about a secret romance kept buried for decades, astonishes him. Overwhelmed by grief and confusion, Tate’s unsure if he can bear learning how the lives of two men entwined over the years, but he reads on anyway, discovering more to value, more to respect, and most importantly, more to love about the man who raised him.

EXCERPT
It wasn’t until three days after the funeral that Tate thought again of the strange encounter with his father’s old friend outside the funeral home.
The past few days, what with the funeral and keeping his mom company and taking care of his own family obligations, had left Tate drained. He had fallen into bed each night exhausted—and quick, heavy, and dreamless sleep followed.
But today was Friday, and Kelly had taken Claire out to a park in Coconut Grove for a play date. Tate had the house to himself and wouldn’t have to return to his veterinary practice until Monday.
He sat down at the iMac they had set up in the study and plugged in the thumb drive Randy had given him at the close of his dad’s viewing hours the other night.
A PDF came up, and the computer asked if he wanted to open it. “I want to open it, of course. Come on!” he whispered to the computer. He chuckled. He’d inherited his great well of patience from his dad.
There was no explanation, no preface.
There was simply the first letter. The handwriting was his dad’s. Even if the penmanship had gotten sloppier over the years, his backward-slanting script was still recognizable.
Tate wasn’t sure what to expect—or why this man Randy had chosen to share such personal items with him. He figured there was only one way to find out.
He began reading.

June 5, 1973
Dear Randy,
Well, kid, it’s been three days, fifteen hours, and twenty-seven minutes since we graduated and I last saw you. But who’s counting?
I don’t know how often I’ll be able to write, what with starting medical school and planning for my wedding. But I wanted you to know that I was thinking of you and, oh hell, how very much I miss you.
I know this is hard. I know you wanted something else. But it just can’t be. The world doesn’t look kindly on two men as a couple, especially if one of them plans on being a pediatrician. And besides, as I’ve told you, I love Sharon in my way. She’s a great girl, and I know she’s crazy about me. We have a good relationship, and I can foresee a great future with her.
Oh shit, who am I trying to kid? She’s a wonderful woman and I do love her, with all my heart. But I love you, Randy, more. And… she can never know this. It would break her heart. It would break mine.
But I still ache when I think of leaving you just as dawn was breaking the other morning, looking up at you standing in the window of your apartment, watching me, your hand pressed against the glass.
I wanted so much to turn around, to just say “fuck it all” to a world that disapproves of something as pure and honest and passionate as what we shared. I wanted to run back up the stairs and into your arms, to cover you with kisses, and take you back to bed—one more time.
Could you see that on my face? Could you see the longing and the pain?
I don’t know what will happen with us, I only know I hope to hear from you sometimes. I can’t, much as my head tells me to, just sever all ties with you. It’s a dangerous game, but a world without you in it, in at least some small way, is a world I can’t bear living in.
My heart won’t let me say good-bye, not completely.
I know that’s not fair to you, but I also know a handsome guy like you, with such talented hands, will not be alone for long. You too will find a nice girl and settle down, have kids, just like I plan to do.
And who knows? Maybe there will come a time when we can all get together with our families. Maybe, after a while, these desires we have for each other will be replaced by friendship and respect, edged out by the love we have for our wives.
I hope so. But today I am missing you and wishing, so hard, you were here in Miami with me.
I start my summer job waiting tables at a little seafood place on the beach tomorrow—and med school awaits at the University of Miami in the fall.
Take care of yourself, Randy, and please, no matter what, don’t forget what we shared. I know I won’t.
Much love,
Mark

Tate sat back in the desk chair, feeling as though his breath had been knocked out of him. His heart hammered in his chest, and his hand, poised over the mouse, was shaking.
His father was gay? Where did that come from? He loved another man? This Randy? Was this some kind of joke? He peered again at the scanned handwriting on the screen and knew it was his father’s own. And he recalled Randy’s face outside the funeral home. Even in the shadows, Tate could see the naked pain on his face.
Tate laid his head on the desk, and the tears, hot and stinging, came from nowhere. Had his father’s whole life been a lie? Had he loved them at all? Or were they just a convenient cover-up, the “proper” thing to do?
“Kelly, Kelly, why aren’t you home?” he whimpered.
After a while he read on.