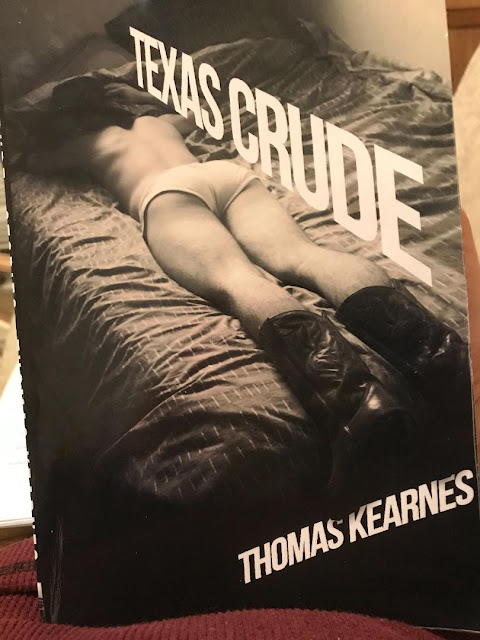 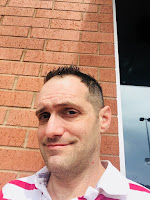 "Jacket copy phrases like 'sordid passions,' 'alcohol and drugs,' and 'harsh landscape of scrub brush' accurately highlight some of the main themes running through Kearnes’s stories. But there’s more here—much more. Texas Crude fronts like its most valuable assets are smut and camp but, much like its characters, will reveal its full, complex humanity to you in good time."

Derek Berry's review in Free State Review
Texas Crude is a solid debut that displays not only Kearnes’ nimble prose and capable storytelling, but also a deep-felt humanity. This author eschews common gay fiction clichés for an exploration of the real.

I WILL FORGET THE SOUND OF HIS VOICE

Tweak makes you ambitious. You fire off paragraph-length texts to friends you haven’t seen in months. You have marathon chats online with guys you’d love to fuck but know will flake. You disclose your extensive sexual history to men whose first names elude you. Our host Adam is higher than all the saints, has been for three days. This explains why some skinny dude stands before us, slipping off his Peanuts T-shirt with an enthusiasm that saddens me like last call on a Saturday night.

My boyfriend Curtis lies at the bottom of the mattress. He lifts his gaze, coolly appraising our unexpected guest’s likely skill on all fours. Curtis wears only a sheer pair of briefs. Its gray hue flatters his toned, tan thighs and taut abdomen. I know it’s crass, but it turns me on when Curtis flaunts his physique. It proves I’m clever. It proves I’ve earned the envy of other men. Now shirtless, the guest frankly surveys my boyfriend. He lightly rubs the bridge of his foot along Curtis’s calf. You have a great body, he says. Curtis chuckles but doesn’t thank him.

I ask the stranger his name. Thomas, he says. Like the tank engine. He laughs at his joke, my first clue he made one. He must be a smart guy or some shit. Curtis asks what’s so funny. Thomas’s smile falters. He stammers about the children’s character he had in mind. I’ve never heard of the fucker. Children disturb me. Curtis laughs, but I don’t hear joy. He asks if anyone ever laughs at that joke. Thomas mumbles and absently rubs his petite, hairy chest. I can’t make out what he says and don’t know if Curtis did. We don’t speak again until Adam returns.

Our host carries a loaded pipe. He never shows anyone where he hides his tweak. House rule. I’ve partied with him two or three times, but never questioned this. His paranoia doesn’t curb his generosity. As long as the dope keeps coming, I don’t give a fuck about its source. On the way home from our first encounter with Adam, Curtis spent the whole ride speculating where he hid his goods. He vowed to suck Adam’s dick so hard and long, the bastard would spill. I watched Curtis do just that at our next gathering, but Adam opened his mouth only to moan, nothing more. Adam asks Thomas if he’s high and learns he gorged on Adderall last night. I’m surprised this fucker could be high on a drug I’ve never tried. It’s a stimulant medication for ADHD, Thomas explains. Way more powerful than meth. I want to ask if he has any left, but that might lead to more talk. I might have to suck him to keep the peace, but I won’t start before I must.