Love at First Sight & Other Musings 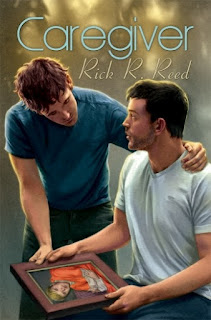 This rainy morning I am thinking about love at first sight. And not necessarily romantic love, although that thought is there, too.

What prompted these thoughts?

As a writer, as a person, I can often be an insecure soul, full of doubts and lacking confidence. When you release a book into the world, it takes on a life of its own, almost as though it's your child out there in the world, making its way. There are people out there, waiting to put the stamp of their own experience on your work. Sadly, no matter how hard you try, there are people out there who want to say that your child is less than you want, hope, and believe for him or her.

Such is the case with my novel, Caregiver, which is based a lot on my own experiences as an AIDS buddy back in the early 1990s, when being HIV+ or having the virus itself was truly a death sentence. On a site called Goodreads, where thousands of readers come together to critique, catalog, and talk about books, I found a review of Caregiver that caught me short. Among all the glowing reviews (and there are many), was one reader that didn't like the book because he thought the main character's love for the AIDS buddy in the book happened too fast to be credible.

Now, this is where the insecure part of me comes in. I can easily shove aside all the many five-star reviews and immediately begin to doubt myself and my work. "Maybe this reader is right," I muse, "And all the good reviews are wrong."

The part that wants to defend my child against this person, though, wants to shout at that reviewer, "But it did happen that fast. It wasn't made up. This connection happened after only meeting two times. That's my truth, not fiction."

See, this is where the stamp of someone else's experience and mine diverge. Intellectually, I do believe that reviewer's criticism was valid. That person, sadly, has maybe never experienced an instant connection with another person. It's not his or her experience. So, he's not buying it.

But, for me, I believe fiercely in love at first sight. For me, when I met Jim, who would become Adam in my book, I felt a rush of emotion for him: sorrow, fear, but most of all a deep, human connection that, in spite of death and the passage of many years, I still feel. And all it took was meeting him for a couple of times. Like Adam, Jim did go to prison--and died there from AIDS. I can count on one hand the number of times Jim and I were actually face-to-face, yet his impression on me is powerful, lasting until this very day, some twenty years later.

I believe we often, or maybe even always, know when someone is right for us, when there is a connection of heart and mind, perhaps even of spirit. This connection happens for no logical or intellectual reason, no basis in shared interests or experience. It's just there, and we know it, deep inside ourselves. For me, that is true of almost every person I've loved. I wish I could explain it, and maybe my writing, which is chock full of people loving each other very quickly, is an attempt to make that explanation.

For me, it happened with Jim. It happened with Bruce, the man I've been with now for more than ten years. I remember picking Bruce up for our first date and seeing him for the first time, sitting on the steps of his apartment vestibule, waiting for me. I can see him as clearly now as I could ten years ago.

And I fell in love, then. There was no basis for it. I had no idea then that we would share many things, like a lifelong passion for the humor and wit of Lily Tomlin (for whom our dog is named), or that we would one day compose a family.

I can tell you the same story about others whom I have loved. Friends I fell for immediately--based on only a smile or a quick conversation.

I can't explain why. It's almost like magic, as though something deeper lies beneath the surface of body and spoken language. It as though we see something in the other that proves to be deeper than easy explanation.

Most of the people in my life that I have truly cared about--and conversely, truly loathed--I knew right away, before I had any rational basis for believing it. I think, when we connect with someone, it's because of something we may never even consciously know, but our heart knows it.

So, while a lukewarm review caused me to write this blog, I will give that reader his or her due because I know that we all have different frames of reference and beliefs.

But for me, I will stick to mine about loving at first sight. My heart tells me it's true.