New and Notable: We Cry the Sea by Glenn Quigley 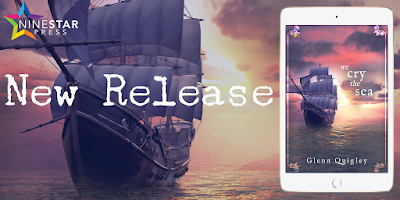 Hi Rick, thanks so much for inviting me to your blog!

My new novel is WE CRY THE SEA in which burly gay fisherman Robin Shipp sets off alone on a perilous journey across the ocean. It’s the third book in my The Moth and Moon series. I thought it might be fun do an acrostic based on the title.

W is for Why Did I Pick Such a Difficult Blog Idea? This is already hard…

E is for Edwin Farriner. Introduced in book one (The Moth and Moon) as one of Robin’s very few friends, their relationship has since blossomed into something more romantic. Usually so steadfast and dependable, how will he deal with the uncertainty of Robin’s absence?

C is for Call. Bucca’s Call, that is. Robin’s beloved boat and constant companion. He was born in it and he’s always said he’d die in it. Be careful what you wish for, Robin…

R is for Robin Shipp. The main character of all three books. He’s tall, wide, big-bellied and big-hearted. At the beginning of The Moth and Moon he was an outcast. Over the course of the first two books we saw him build himself a family. How will he fare without them?

Y is for You’d Think I’d Have Something Better For Y. But I don’t. Just skip to T.

T is for Treachery. When you’re knee-deep in a pirate’s lair, you’d better hope you know who your friends are.

H is for History. The book is set in the year 1781 but it’s a slightly skewed version of the past. In this world, there’s no religion and no prejudice based on gender identity or sexual orientation. Everyone is free to be who they are but that doesn’t mean there aren’t plenty of other reasons to dislike someone.

E is for Eva Wolfe-Chase. The aristocratic head of the Chase Trading Company will come to loggerheads with her cousin over how the business should be run. How will her actions impact on Robin’s time at sea?

S is for the Sea. Given that my main character is a fisherman, the sea plays a big part in setting the atmosphere for my books. It’s always been a comfort to Robin but now that he’s alone against the elements, he might just come to think of it as an enemy.

E is for Endings. Every story has one. And so does every person. Someone isn’t making it out of this story alive…

A is for Arminell Pinch. Introduced in book one as a tavern girl and given a name in book two (The Lion Lies Waiting), we get to see her in a bigger role here, and discover her family connection to the Moth and Moon. 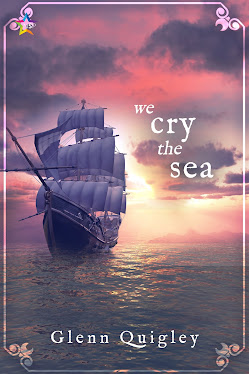 After the explosive events of The Lion Lies Waiting, life has returned to normal for burly fisherman Robin Shipp. That is until the innkeeper of the ancient Moth & Moon approaches him with a surprising proposal, and an unexpected arrival brings some shocking news that sends Robin on a perilous journey alone.

While he’s away, his lover, Edwin, anxiously prepares for the birth of his first child with his friend, Iris. Her wife, Lady Eva, must travel to Blackrabbit Island for a showdown over the future of the family business. Meanwhile, Duncan nurses an injured man back to health but as the two grow close, the island’s new schoolmaster makes his amorous intentions clear.

Robin’s search for answers to the questions that have haunted his entire life will take him away from everyone he knows, across a dangerous ocean, and into the very heart of a floating pirate stronghold. Pushed to his limits, Robin’s one last chance at finding the truth will cost him more than he ever imagined.

I have a newsletter that goes out every Friday and is packed with photos, original art based on my books, and promo codes. www.glennquigley.com/newsletter

I‘m a graphic designer by trade and I’ve come up with a bunch of t-shirt designs based on the world of my books. There’s the sign above the inn, a souvenir-style shirt and some pirate flags! They’re available exclusively from www.TheMoodybear.com and you can customise the colours and styles. https://themoodybear.com/themothandmoon.html

Glenn Quigley is an author and artist from Dublin and now living in Lisburn, Northern Ireland. He designs for www.themoodybear.com as well as taking portrait commissions.

In March 2018 his debut novel, THE MOTH AND MOON, was published by Ninestar Press. December of that year saw the release of the follow-up, THE LION LIES WAITING. In March 2021, the long-awaited third book in the series, titled WE CRY THE SEA, will be published.