A Little Taste of THE Q, My Novel About a Small Town Gay Bar 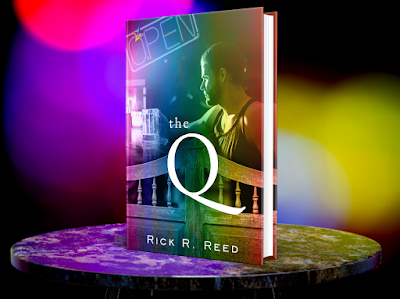 My latest novel, The Q, takes place over the course of one pivotal Saturday night in a small town gay bar. Read on for a glimpse into just one of the characters my story chronicles.

Nelson DiCarlo wondered, for the thousandth Saturday night, why he didn’t stay home.

After all, he had regular cable, Netflix, Hulu, Amazon Prime, and YouTube. He had a fully-stocked liquor cabinet and could make himself just about any cocktail he could imagine, from the simple—gin and tonic with a twist of lime—to the exotic—a Pimm’s Cup with orange and cucumber slices. His pantry was stocked with chips, cookies, and crackers to go with the cheeses and dips in his fridge.

His dog, Homer, a so-ugly-he’s-cute mix of dachshund and poodle, was always ready to cuddle or take a long walk in the night air. So, he couldn’t say he was lacking for company. Homer was short on judgment, long on love, and as long as Nels was paying attention, the dog never got bored. If Nels’s attention did stray, the dog reeled him back in by covering his faces with kisses.

No, really, there was no reason why he, at sixty-two years old, should be getting ready to go out to a bar on Saturday night. Really, he needed to simply accept his lot and stay in, go to bed early, like the old man he was.

Nearly entirely banished were the dreams that being out at the Q—the only gay bar in his little one-horse town of Hopewell, West Virginia—would conjure up a man who’d be everything Nels dreamed of: a passionate lover, a faithful companion, a best friend forever. He even held out little reason to believe the conversations he’d have with the same folks he saw every Saturday at the Q would be any different or more exciting than they had been on any other Saturday night, dating back years.

He had no reason to think that, even if he’d given up all hope for a Mr. Right to come along on his white horse, he would meet a Mr. Right Now. There were a few of those in his past, but none lately. Not for a long time… So long, in fact, that Nels no longer pined for a physical connection with another man.

So why go out?

It was routine. It was a bore.

Yet, here he found himself, in the tiny blue and yellow ceramic tile bathroom of the house he’d grown up in—the one he’d inherited from his mom when she passed from lung cancer seven years ago—shaving in front of the medicine cabinet mirror.

It was funny, how he sometimes glimpsed the man he once was in that mirror, especially when half of his wizened face was hidden by Barbasol shaving cream.

If he squinted just right, he could look back in time and see the man he’d once been, hidden in the depths of the glass. He’d been handsome, what Mom would call a head-turner. On the shorter side at five-feet-eight-inches, Nels had been solidly packed with effortless muscle and good definition. Firm pecs. Bulging biceps. Thick black wavy hair and eyes so dark the pupils got lost in the irises. A perpetual five o’clock shadow that highlighted, rather than hid, the sharp angles and planes of his face, a contrast to his cupid’s bow lips. People, men mostly, used to tell him he should be a model.

That young buck hidden in the mirror was forever mistaken for being younger than he actually was. In his twenties, he was always asked for an ID. When he was in his thirties, everyone imagined he was in his twenties. In his forties, people guessed thirties. Even in his fifties, folks would guess mid- to late-forties and they were always surprised when Nels corrected them, because he never lied about his age. It was always a delight to get the compliments, “I never would have guessed!” “What’s your secret?” And that dreaded left-handed compliment, “You look great—for your age.” 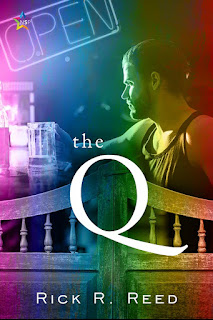 Step out for a Saturday night at The Q—the small town gay bar in Appalachia where the locals congregate. Whose secret love is revealed? What long-term relationship comes to a crossroad? What revelations come to light? The DJ mixes a soundtrack to inspire dancing, drinking, singing, and falling in (or out) of love.

This pivotal Saturday night at The Q is one its regulars will never forget. Lives irrevocably change. Laugh, shed a tear, and root for folks you’ll come to love and remember long after the last page.