New Release: MORBIDLY OBESE About a Vampire Who Has Some Heft to Him 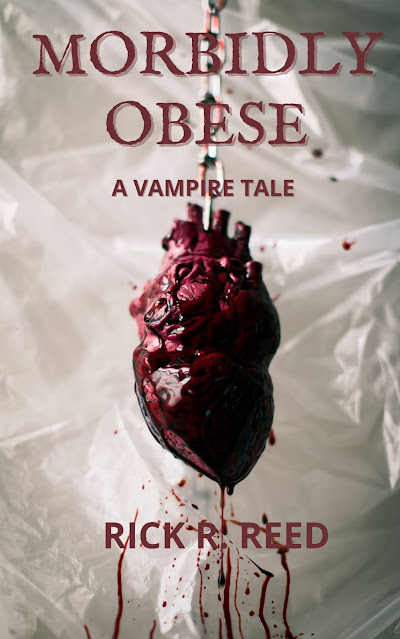 I have a new story out and it's one that will surprise you--a vampire tale that's laugh-out-loud funny.

ABOUT THE STORY
Milton Bradley was not your typical vampire. Finding someone to love and with whom to share eternity would be difficult enough for a man who weighed over 400 hundred pounds, let alone one of the undead who only came out at night. Milton is caught in an endless cycle of blood sucking, guilt over his weight, and eating more to make the pain of being different go away.

Can the answer to his prayers be found in a 12-Step group for overweight vampires called Morbidly Obese?

Milton sat near his coffin, a custom job crafted from oak, wearing a blood moustache and feeling miserable.  It was a vicious circle, he thought, I am an addict.  The hunger gets out of control, I binge, then feel horrible, then binge again to ease the guilt and remorse.

It was the blue gray hour just before the sun rose and Milton recalled Sheila and Marie, the surprised looks on their faces when he approached them and tried to convince them that he too, had stumbled into the wrong meeting, suggesting they still their beating hearts by having a few slices of pie at the Baker’s Square which was just around the corner.  The women had been leery, but the promise of French Silk pie made them abandon their good sense when Milton suggested a shortcut through a dark alley from which they never emerged.

Milton climbed into his coffin and pulled the lid shut.  He promised himself that he would begin his diet tomorrow.  Tomorrow, he told himself, was another night.

But when the sun set the next night, Milton found himself rising with hunger pangs.  It was hard squeezing out of the coffin and Milton told himself mildew must be getting into the crypt somehow because the wood was surely beginning to contract.

He tried to deny the hunger pangs, telling himself that it was too difficult for him to have just one.  He could never stop at just one...no, he had to have a battalion, a troupe, a club, a group, a squad, a regiment, an assembly, a crew...drinking, drinking, drinking until he felt bloated, until the sharp copper tang of freshly-let blood filled the air...it was only then that Milton felt sated.

And just look where it’s gotten me, he thought with despair, I can’t even see my feet!  Thank God I don’t ever have to look in a mirror.

Milton struggled into his XXXL black canvas pants and black sweat shirt. Even these were beginning to feel snug and soon he would have to find a tailor, because he had gone as big as he could go with off the rack clothes.

And in spite of all these sensible thoughts, Milton still craved blood...large quantities of blood.  Why weren’t there vampire diet pills?  Why couldn’t there be an undead equivalent of Slim Fast?  He’d heard of liposuction...but how could he find a physician to perform the operation?

The first step of Morbidly Obese, the self-help group came back to him, haunting: We admitted we were powerless over our compulsive death and dining behavior; our lives had become unmanageable.  Milton felt a tear at the corner of his eye and reached up to wipe it away: his finger came back smeared with blood, greedily he licked it from his own tantalizing digit.

The tiny taste of blood made him crazy, filled him with blood lust.  In the midst of his red-misted fervor, he thought: this is the way it is for addicts...the yearning controls them instead of the other way around. He realized he was powerless. And a tiny voice inside said: “Yes, Milton you are powerless...so go with it.  Why fight it?  Lay down the sword and the shield and drink until you’re full.  Go on, you deserve it.”

Milton was out of the crypt as fast as his pudgy legs could carry him.  There was no gliding on air for a 400-lb. vampire.  His hunger warred with his desire to be thin.  I’ll start tomorrow night, he told himself, heading toward a little theater he knew of, one that was in rehearsal for a production of Twelve Angry Men.  Twelve was such a lovely number, he thought, and licked his chops.  These twelve men won’t be so angry when I get through with them!