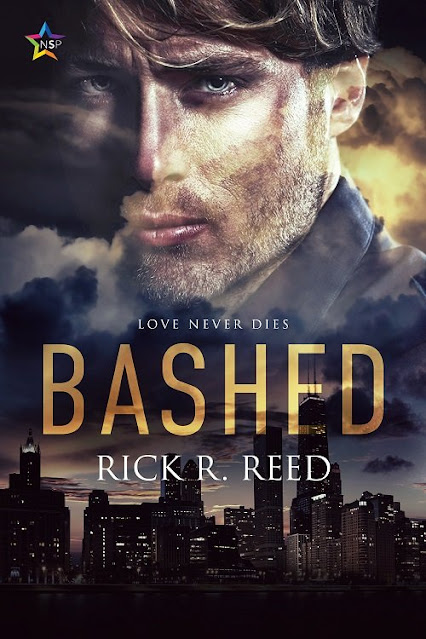 For #Pride2021 🏳️‍🌈, I'd like to highlight the novels I've written that have the most relevance to issues facing our #LGBTQ community.
BASHED deals with the aftermath of a horrible #hatecrime and how it affects the victims and perpetrators.
If you want a copy, BASHED is available from Amazon at https://www.amazon.com/Bashed-Rick-R-Reed-ebook/dp/B08DTKLZ3V and other online retailers.
#ownvoices #gaybashing #ghoststory

Do you believe that real love never dies?

That's the premise behind my ghost/love story from NineStar Press, Bashed.
Bashed is a haunting blend of romance and suspense, wrapped up in a timely story that could have been ripped from today's headlines.
The GLBT Roundtable of the American Library Association gave Bashed a highly favorable review and recommended the book for public libraries.

In part, the review said:

"A gripping thriller told from multiple points of view, Bashed delivers what readers have come to expect from Rick R. Reed: a violent and emotionally wrenching tale of realistic horror. The story is told by three characters: two perpetrators of a horrifying hate crime, and the man who survived the attack...The violence is graphic, as is the sex, but neither is gratuitous..." 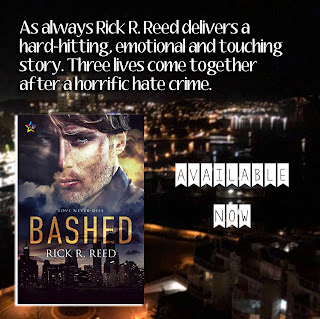 BLURB
It should have been a perfect night out. Instead, Mark and Donald collide with tragedy when they leave their favorite night spot. That dark October night, three gay-bashers emerge from the gloom, armed with slurs, fists, and an aluminum baseball bat.

The hate crime leaves Donald lost and alone, clinging to the memory of the only man he ever loved. He is haunted, both literally and figuratively, by Mark and what might have been. Trapped in a limbo offering no closure, Donald can’t immediately accept the salvation his new neighbor, Walter, offers. Walter’s kindness and patience are qualities his sixteen-year-old nephew, Justin, understands well. Walter provides the only sense of family the boy’s ever known. But Justin holds a dark secret that threatens to tear Donald and Walter apart before their love even has a chance to blossom.
THE TRUE STORY BEHIND THE BOOK
Sometimes, ideas come from real life. Such is the case with my novel, Bashed. For a lot of gay men and women, hate crimes are a fact of life. Many gay people have either themselves experienced the terror, violation, and persecution of being attacked simply for who they are (and whether the attack took the form of words, fists, or something more lethal) or, at the very least, they know someone who has. I've been lucky. I have no permanent physical scars. But I did come very close to experiencing a hate crime up close and personal (and I suppose one could argue that what I did experience was actually a hate crime) and that formed the basis for the inspiration of my novel. The title, of course, refers to being fag-bashed.
My close call came one October night several years ago back when I still lived in Chicago. I was once into what's affectionately called the "leather scene" and owned chaps, biker jacket, boots, and other accouterments that passed the dress code in either a gay leather establishment or a biker bar. That particular night, I had been hanging out at the Eagle, one of Chicago's foremost leather establishments. I had stayed late, arriving after midnight and leaving near closing, at close to four o'clock in the morning. I had made a new friend and we were making our way to my car, which was parked on a side street that ran parallel to St. Boniface Cemetery. It was a very dark and quiet side street, made all the more so by the late night hour. My companion and I weren't thinking about things like fag bashers or hate crimes.
But we suddenly were when we noticed an idling old car parked just opposite from my own. The car was a souped-up muscle vehicle of some sort and inside it, we could see several dark figures, all turning their heads, alert, as we approached. Both of us tensed and quickened our pace. Even in the middle of a metropolis like Chicago, it was easy to feel vulnerable and alone. And we felt even more vulnerable when the still of the quiet night was broken by the sound of car doors opening. Suddenly, my friend and I stopped, feeling exposed in our leather gear, as four young men emerged from the car. To the man, they all sported shaved heads and were dressed in uniforms of baggy jeans and hoodies.
And one of them was carrying an aluminum baseball bat.
They didn't call us "fags" or "queers". They didn't say anything. Their silence was perhaps more frightening than if they had hurled epithets our way. To reach my car, we would have to walk right by them...and it didn't appear as though they were planning to let us pass.
It was like being confronted by a Grizzly in the woods, or a lion in the jungle. What do you do? Run the other way, knowing that four strong men are on your heels? Try to get to your car and hope that the baseball bat was for a late night game of sandlot?
We froze. The four, as a unit, moved closer. One of the guys, the one with the bat, grinned, swinging the bat slightly.
This was a moment of irrational fear. My heart pounded. A trickle of sweat ran down by back.
In books, they call what happened next predictable or deus ex machina, but at just that moment, one of Chicago' finest rolled down the quiet street, very slowly, toward us. The men got in their cars quickly. And so did we.
Thankfully, I do not know what the outcome of that night would have been had not the police come along on such a fortunate patrol.
But the incident did stick with me for many years, until I got around to dramatizing the incident as the opening to Bashed. But in my fictional world, no police car came to the rescue and the pair of guys emerging from the leather bar end up bashed very badly...with an aluminum baseball bat. It’s chilling to think that one of your characters could have been you, a you that might not have survived to tell a tale again.
BUY
NineStar Press
Amazon
at June 17, 2021