Every Friday, I want to take a look at what's, well, new and notable on my radar. It will probably be mostly books, but I might throw in movies, TV shows, toys, and who knows what else.

Whatever it is, I'm excited about it and I want to share it with you. 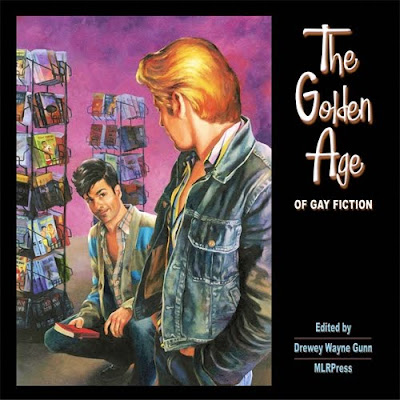 This week I want to call your attention to a groundbreaking new book just released by MLR Press, The Golden Age of Gay Fiction. This is a beautiful, passionate, and thoughtfully considered collection of essays about gay fiction from a time when books like these were sold on drugstore revolving racks and magazine outlets...and hidden under the bed when you got home. These are the books which we now refer to as pulp fiction. They were written mostly by gay authors for gay people.

The essays--written by some of the foremost names in gay literature and history--make this book a true piece of history. And the collection of cover art makes its hefty price tag still a good value.

Here's what Victor J. Banis, a gay literary icon himself, and one of the contributors had to say about the book:

"Since so much of our gay history, and especially the history of gay publishing, has ended up on the societal garbage heap, it is a true joy to see this significant chapter reclaimed, and done so in such fine style. I don't think in my nearly half a century toiling in the vineyards that I have ever been prouder of anything than I am of my inclusion in The Golden Age of Gay Fiction. I'm proud beyond words of Laura Baumbach, who has stated all along that this was not about making money, that she was doing it because it needed to be done; and of Wayne Gunn, who conceived of the idea and worked for months to bring it to fruition, and whose unimpeachable standards made us all determined to give our best. I'm proud of every one of the contributors, and what an A-list they are! And of those who worked so hard at MLR to make the book as good as it could be – Deana Jamroz, Kris Jacen and Judi David come to mind at once, but I know there were others and I am sure they are as proud of the result as I am.

To attempt to catalog everything in this jam-packed volume would take practically another book. Popular mystery writer Josh Lanyon takes a look at Joseph Hansen's early novels written as James Colton, an all but forgotten treasure trove, and Nowell Briscoe writes a lovely and touching essay about his friendship with Lonnie Coleman, another all but forgotten name from the golden age. Earl Kemp, legendary editor at Greenleaf Classics, offers an amusing and eye-opening piece on what it was like in those storied halls, and William Maltese offers his own experiences as one of the early pioneers. There are authoritative and entertaining looks at gay westerns, gay detectives, and gays in the military, and another on homosexuality in the genre of science fiction. For some, the generous collection of that great pulp cover art (in themselves an important factor in the gay publishing revolution) would alone justify the cost of the book. For first time all of those fabulous covers from my Man From C.A.M.P. series are collected in one volume, and all in living color, and if they don't get a smile out of you, you're wearing the wrong shade of lavender. Plus, for the serious scholars, there's practically an entire reference library of titles, publishers, additional sources et al.

For all of us, this was a genuine labor of love, and I sincerely hope that everyone who reads the book will share in the love and pride that went into it. And to all those forgotten and neglected heroes of our literary past who are no longer here to hear the applause, I offer a silent and heartfelt salute. I'm humbly proud to have been among them, too – if only, as I have said elsewhere, as a little man in a very big cause. We changed the world. Damn! Who wouldn't be proud of that?"