A Dignified Review of an Undignified Book: DIGNITY TAKES A HOLIDAY 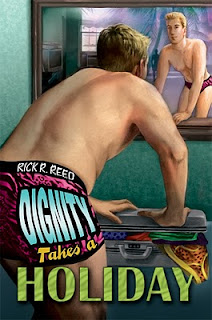 I woke up this morning to a wonderful review of my "very different" "offbeat" romance, Dignity Takes a Holiday

. Writing the book and submitting it, I knew that Dignity

was something very unusual for me, a book that readers would either "get" or not...and I was prepared for the possibility that it was the kind of effort that would either be loved or hated, with very little in between.

And that is being borne out now in the reviews its getting and comments from readers. Jerry Wheeler, at Out in Print Reviews, gets that too. I like that he understood I took a chance and "stretched" to write a book that, even for me, is very far from what I would usually write (it's been compared more than once to John Waters, and I think that's apt).

Anyway, Mr. Wheeler says, in part: "Reed goes far out on a limb here, writing slapstick farce instead of his usual taut suspense and horror thrillers. Writers who take themselves into unfamiliar territory are to be applauded. The chances they take, whether successful or not, bespeak a willingness to grow beyond what their audience expects of them and that experience is usually reflected in a deepening—a re-dimensioning (I love making jargon up)—of whatever genre they’re better known for when they return to it.

"But that’s not what you want to hear, is it? You want to know if it’s any good.
The answer is a qualified ‘yes.’ Qualified because Dignity Takes a Holiday is purposefully over the top and that alone may put some readers off. The abuse Helen dishes out is so severe and the situations Peter finds himself in are so outrageous that you may find yourself reading with a grimace instead of a grin. Funny, yes—hysterical at times. But painfully so.
"However, this is all set-up for the ending, which (and this is typically Reed) puts the preceding events into context and reveals the heartfelt relationship underlying the farce..."
Read the whole review here.

SYNOPSIS
Pete Thickwhistle doesn't live what one might call a charmed life. At age forty-seven, he's a flamboyant gay man who believes no one knows he's gay, still living at home with his harpy of a mother. Worse, he's still a virgin, longing to find just the right man to make his life complete. Pete's an upbeat kind of guy, yet he's never learned that the answer to his motto "What could possibly go wrong?" is always: "Everything."

Pete's road to love and happiness is full of potholes, yet he never tires of searching, despite job losses, weight battles, clothing faux pas, and disastrous vacations, parties, and dating debacles. Pete is the ultimate underdog living a television situation comedy, one named Dignity Takes a Holiday.