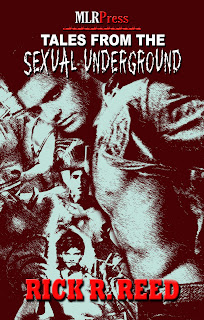 . When the book appeared in March of 2010, Rainbow Reviews said, "Aside from the fact that he is a solidly good writer and I enjoy his versatility in genre writing, whether in the realm of horror, the suspense thriller, erotica or romance, what attracts me to his stories most is that they are highly imaginative, they push boundaries and they challenge me as a reader. Tales From The Sexual Underground

accomplishes all of this and more. And while a handful of the stories in this collection took me outside of my comfort zone leaving me wide-eyed and breathless, the thrill and anticipation of what was to come as I continued to turn the page was like an aphrodisiac."

BUY Tales from the Sexual Underground

Page 60:
Neg. UB2. That’s common internet parlance for “negative—you be too,” and it irks many poz people. Maybe it irks them because:

It’s late and the leather bar I’m sitting in is at the prescient moment just before the bartender shouts, “Last call!” Just before the lights come up to change the dark, smoky, sexually-charged universe that the few remaining men in the bar inhabit. There is the smell of desperation in the air, as these few look around for someone with whom to spend an hour, the night, their lives. Should we go next door to the baths?

An acquaintance sits next to me. I’ve seen him before, maybe even done him once in the backroom. We chat off and on, as our predatory gazes scan the room. We know nothing about each other, really. That’s about to change.

He fingers the chain and leather harness across his broad chest, glistening with sweat and a matte of dark, going-to-gray chest hair.

“That works for you?”

I recall when we exchanged our HIV statuses at one point; not tonight. He’s poz. Makes me wonder: “So, do you tell these guys about yourself?”

The bar’s hot. Blue smoke hovers near the ceiling. I feel a chill. “Why not?”

BUY Tales from the Sexual Underground 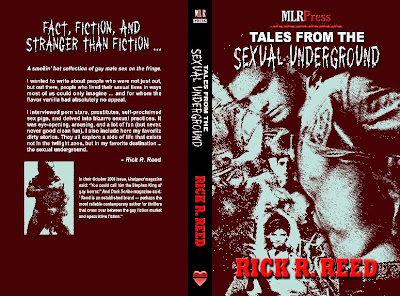