Win a FREE copy of OBSESSED, my serial killer thriller 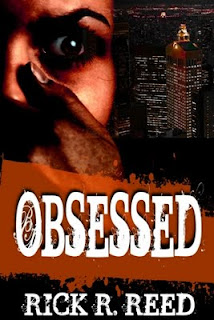 UPDATE: Thank you all for entering! Through a random selection process, we have a winner: Sherry Strode. Congratulations, Sherry! Untreed Reads will be in touch with you to get you your copy soon.

To celebrate the e-book release of my 1991 thriller/horror novel, Obsessed

, from Untreed Reads, I am giving away a copy to one lucky reader in the e-book format of his or her choice. To enter the drawing for my story about a deranged serial killer who believes he's a vampire preying on Chicago, simply follow these rules:

1. Leave a comment below.
2. Be sure to leave an e-mail address so I can get in touch if you're a winner.
3. Bonus points for reposting news of this contest/release on your Facebook, Twitter, group, blog, or other social network.
4. Even more bonus points if you click on the link at the right to subscribe by e-mail to this blog.

I will announce the winner on Friday morning.

was part of Dell's historic horror line, Abyss, lauded by none other than Stephen King.

You don't have to wait to win the contest to get a copy. Obsessed

is now available through the following:

I kill, therefore I am…

A witness has seen him, but his killing only turns her on and now she wants to protect him. His wife suspects him, but the private detective she hired cannot stop him. Joe MacAree fears nothing--except that he may no longer be human.

The thirst that drives him is relentless, moving deeper and deeper into his own shattering, private realm, where each murder is a delicious new gift of life, where revulsion is beauty, and the obsession will never let him go.

Joe MacAree had just murdered a woman, and all the things he felt when he killed the other four he was feeling right now. How would he describe it? In his journal, he might call his feelings an “elevation of the senses” or “an ethereal quality bringing the world into sharp focus.”

After each killing the reaction was the same. There was a moment of sharp pain right behind his left eye, an instant where the pain was so intense as to block out the act he had just committed, the blood and the ripped flesh…then a moment where brilliant flecks of silver light swam before him, and he could not keep his eyes from rolling, trying to follow the patterns the stars made.

And then the clarity.

As he guided his light blue Honda Accord along Harlem Avenue just south of Chicago, everything seemed more alive, as if to contrast the death he had just brought about. He noticed things he never noticed: the shifting red, amber, and turquoise of the reflections the stoplights made on the rain-slicked pavement. He noticed how the color spread, muted, over the slick black roadway. Even his radio, usually sounding tinny tuned to WLS, seemed more vibrant. He heard the different instruments in “Hungry Like the Wolf” as if Duran Duran were in the car with him, playing. Although it was February and his windows were rolled shut, he listened to the sounds of the other cars, the hiss of their tires on the pavement, the bass of their engines. He felt each perforation on the cover of the steering wheel. He thought he could even sense the mechanical smell of his own and the other cars as they all made their way northeast, to the Eisenhower Expressway and the city.

And in his mouth, he savored a slight metallic taste.

Randy Mazursky had lived in Berwyn all his life. The suburb just west of Chicago had been where his father grew up and where his grandfather had set up his home when he came over from Poland to work in the meat yards of Chicago.

Randy liked Berwyn. It was familiar: The streets, gridlike, had always made it easy to get around and easy to give new people directions to his house on Oak Park Avenue. And best of all it was close to where he worked, the North Riverside Mall, where he managed an ice cream parlor called Whipped Dream.

Tonight he had spent a little longer at the restaurant than usual, since one of his waitresses had come down with the flu that everyone (his wife, Maggie, included) seemed to be getting just as it looked like winter was about to come to a close. She had left midway through her shift, leaving a busy Friday night crowd of screaming kids, hassled parents, and birthday party victims.

Randy had donned the blue and white striped waiter’s cap he had worn when he started at Whipped Dream three years ago and, like the trooper he thought himself, had gone out and served up Tin Roof sundaes, blown whistles, banged drums, and sung “Happy Birthday” with the rest of the crew. He knew it wouldn’t hurt the “kids” to let a pro show them how it was done.

Randy had enjoyed the change. But it had been a long time since he had waited tables and he barely had the strength to hold the steering wheel properly. It was only ten minutes to his home and Maggie, but the eagerness to get there made the ride longer.

He knew he didn’t have to worry. Maggie would have a great dinner waiting for him. Ever since Maggie had quit her job as a proofreader of Sears catalogs, she had become a virtuoso cook, even taking classes in Chicago. Randy had gained fifteen pounds.

He and Maggie had been married for only seven months and already she was pregnant.

The baby was unplanned; they had wanted to wait until they had a chance to buy a house before they had children. Right now they rented the second floor of a two-flat.

But when Maggie had whispered “we’re going to have a baby” in his ear right before he fell asleep one night, he felt nothing but delight. That delight and anticipation had not worn off in the two weeks he had been aware of his imminent fatherhood.

Now as he backed the car into a space in front of their yellow brick home, he felt a sudden urge to run up the stairs and hug Maggie. He knew she didn’t like him working late and wished he had thought to bring her something.

Well, he could make it up to her in other ways. As he closed the door of his car he smiled: There was no trace of the exhaustion he had felt just moments before.

Quickly he unlocked the two locks on the outer door and took the steps two at a time. As quietly as he could, he slid the key into the door of their apartment, hoping he could surprise Maggie in the kitchen.

He opened the door and closed it behind him, trying to stifle the click of the door as it closed. Randy crept through the living room, not wondering why the apartment was so still, why their stereo, Maggie’s constant companion, wasn’t on. He noticed only the yellow block of light that was the entrance to the kitchen as he made his way toward it on tiptoe.

As he stood in the archway, he began laughing. And the laughter did not stop until almost an hour later when paramedics put him under sedation.

Maggie, her dark hair a bizarre contrast to the pasty white of her usually dark Italian skin, lay dead in the middle of the kitchen floor, her throat and wrists cut. Her hair fanned out on the beige linoleum and her arms were out, almost as if she had been crucified.

The cat, Scruggums, sat beside her, licking his paws.