Gay for You or Out for You? 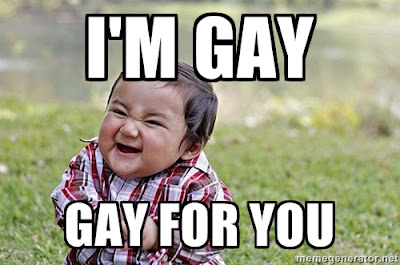 I ran across this gem of logic on Gay Book Reviews. And surprisingly, this was originally published in 2011. Given the controversy recently making the rounds over GFY recently, I think it definitely bears repeating.

Wise and common sense words from Damon Suede on the whole GFY trope:

I don’t believe in “Gay for You” actually, either as a trope or a designator; the popularity of the term within the genre always makes me laugh because only someone who had never come out or seriously questioned their sexuality could think that same-sex desire works like a rigid boolean switch. We know that’s bullshit.

I tend to think of it as “Out for You” as Marie Sexton calls it. The thing is, “Out for You” is how most gay men figure themselves out sexually, at whatever age they come to terms with their sexuality. They meet someone who arouses feelings that make them question their self-image.

Desire exists along a very complicated four dimensional spectrum. What we want over the course of our lives changes radically, and that’s only one set of desires!

Gay For You is an outdated label we give stories when men who are “straight” fall for one special guy….who “makes” him “gay”. As if this character would have been happily straight for the rest of his days EXCEPT for this accidental meeting that realigns his existence and his heart.

There’s another term for that in the gay community: it’s called COMING OUT.

Of course this means the term “Gay For You” HAD to have been coined by someone who had never faced that kind of radical realignment of their assumptions about gender and identity. Gay For You is a relic of another time in M/M and I’m praying to all the gods that it finally falls out of favor. I’m trying to not even USE it anymore because of the lie at its heart as a designator.

For that matter, this is why it is now considered unacceptable to use the phrase Sexual Preference  as opposed to Sexual Orientation when discussing GLBT issues. “Preference” implies that Gayness is a choice made of a menu of possibilities. Or that straight people simply obeyed society’s wishes and “picked” correctly. Again, not how sex works for anyone of any gender.

If anyone doesn’t think “Gay-For-You” is a stupid, vicious term, imagine if I started asking heteros who married their first love if their spouse had made them straight… or worse, consider rapists who argue that victims seduce them. Love and sex involve mutual participation.

So I don’t hate what is popularly referred to as Gay For You in books, I hate that it is CALLED Gay For You because the term is literally moronic and misguided. It’s something coined in ignorance that persists out of familiarity

On the other hand I love a beautifully written coming out story in which a man who had assumed things about himself makes life-changing discoveries that transform his future. What’s more romantic than that? :)
Posted by Rick R. Reed at 12:30 AM