Come Through the Closet Door with Me 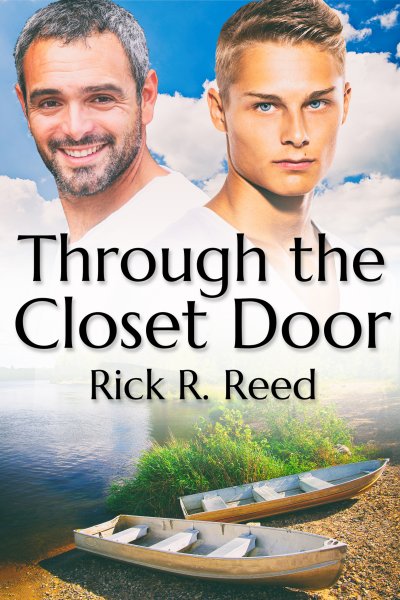 Through the Closet Door is a story that's near and dear to my heart and almost painful for me to read. It's a story about a young married man coming to terms one summer with the fact that he's gay. In spite of his emerging, but-will-not-be-denied sexuality, he truly loves his wife and he knows that acceptance will mean a traumatic and painful upheaval, and knows too, that self-acceptance has a terrible price: causing those he loves incredible pain.

I know because I have been that young man. Although the physical details of my new story are not autobiographical, the emotions certainly are, so this is one tale that really hits close to home for me.


I hope you'll check it out. I think it's a really meaningful, poignant, and touching read, whether you've been through what the main characters have or not. To read the story for only $1.99 (or for free if you have Kindle Unlimited), just click on the hyperlinked titles above or the BUY link below.

BLURB
Gregory seems to have it all: youth, good looks, a beautiful wife, a job he loves as an elementary school teacher, a quiet house on the beach.

So why is Gregory so miserable? Why is he unable to control his lingering gaze on his neighbor, Jake, the handsome truck driver who lives just down the way? Why does Gregory spend his private time keeping a secret journal that details fantasies and memories of him locked in embraces with other men?

It’s summer, and the peaceful lake belies the turmoil in Gregory's heart. His wife wants to start a family, while Gregory wants to start something with Jake, but doesn’t dare.

Climbing out of the closet is never easy ... but it’s even more difficult when doing so might shatter the lives of those around you.

Gregory sets down his beer, turns so that he is facing away from Jake. It surprises him and he sucks in a breath when he feels the calm pressure of Jake’s hands on his shoulders, kneading. The massage is soothing, his digging fingers sending warmth through him. He allows his head to loll back, surrendering to the pleasure of Jake’s strong hands. If he could just sit here forever and Jake would continue his ministrations, his problems would disappear and he wouldn’t have to think. He believes that’s the key to this problem: thinking. He doesn’t ever want to think again. He closes his eyes as Jake’s hands move up and down his back, squeezing and releasing the taut muscles just below his skin.

“Jesus. You did have a fight,” Jake says. “You’re so tense. Relax and let old Jake take care of untangling those bunched-up muscles.”

Gregory wants nothing more. This feels so right and so wrong…all at the same time. He shouldn’t be doing this. Reluctantly, he moves forward, so that Jake’s hands will drop from his back. The absence of Jake’s touch makes him long for more, like some deep-seated hunger that is simple minded in its pursuit of satisfaction.

Impulsively, Gregory turns and hugs him. He is more surprised by his action than he imagines Jake is. The intense brown of Jake’s eyes is apparent, even in the dark. Gregory feels he could lose himself in the brown, letting it swallow him up like a cold spot in the lake. The feel of Jake’s body so close, the strong arms wrapped around him are like a blessing, a relief after so much denial.

Then Jake is leaning close, and Gregory feels the soft pressure of his lips on his own. Gregory closes his eyes, shutting everything out save for the soft cool of Jake’s mouth on his. He lets his head go back, parts his lips to admit Jake’s tongue and, almost of its own accord, his hand comes up, grabbing Jake at the nape of his neck and pulling him closer. The feel of Jake’s beard against his smooth skin is electric, and Gregory finds himself out of control, lost, as he mashes his mouth against the other man’s, his tongue dueling, the taste of beer and cigarettes and something indefinable and sweet filling his mouth.

An image of Rosemary intrudes, that same image of her standing near the window, watching for his return, wondering what he’s doing. And what is he doing?

Just as suddenly as the kiss begins, it stops as Gregory stiffens, leaning back. Jake pulls away, regarding him out of the corner of his eye, back against the porch swing. Jake is breathless. He lets out a small laugh, husky.

Gregory forces himself to scoot down on the bench a couple of inches, so that their contact disappears. He doesn’t want this to end, yet at the same time, sees no other road open to him. He can’t live split in two. Weakly, he mumbles, “I have to get up early tomorrow.”

“Sure,” Jake whispers, reaching for another cigarette. The flare of the lighter illuminates his face for a moment and Gregory is certain he can see frustration and disappointment in the other man’s craggy features. He exhales smoke and looks out toward the lake. “I understand. You run along now. Be a good little boy.”

And Jake puts a finger to Gregory’s lips, the lips he’s just kissed. “Hey, don’t worry about it, man. Believe it or not, I was married once, too, even have a couple of kids, so I know. I know.”

Gregory is off the porch and swallowed up by the darkness before Jake has a chance to say another word. He stomps through the night, his footfalls hard, firm, and rapid as he heads back toward his own home…and Rosemary. He doesn’t question why his breath is catching and why his face is covered with salty tears...

BUY
Amazon Kindle (FREE if you have Kindle Unlimited, otherwise $1.99)
Posted by Rick R. Reed at 5:00 AM