BIGGER LOVE is Now Out in Audiobook 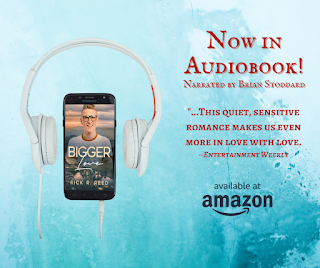 Thrilled to announce that my angsty small-town high school story of young love, coming out, and loving oneself is now available in audiobook, narrated by the awesome Brian Stoddard.
Get your copy here:
https://www.amazon.com/Bigger-Love-Book/dp/B09XBVSWZL 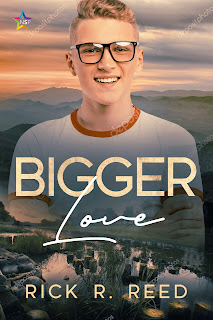 Truman Reid is Summitville High’s most out-and-proud senior. He can’t wait to take his fierce, uncompromising self away from his small Ohio River hometown, where he’s suffered more than his share of bullying. He’s looking forward to bright lights and a big city. Maybe he’ll be the first ever genderfluid star to win an Academy Award. But all that changes on the first day of school when he locks eyes with the most gorgeous hunk he’s ever seen.

Mike Stewart, big, dark-haired, and with the most amazing blue eyes, is new to town. He’s quiet, manly, and has the sexy air of a lost soul. It’s almost love at first sight for Truman. He thinks that love could deepen when Mike becomes part of the stage crew for Harvey, the senior class play Truman’s directing. But is Mike even gay? And how will it work when Truman’s mother is falling for Mike’s dad?

Plus Truman, never the norm, makes a daring and controversial choice for the production that has the whole town up in arms.

See how it all plays out on a stage of love, laughter, tears, and sticking up for one’s essential self…

"...a heartrending tale of a gender fluid teen who dreams of the bright lights of Hollywood and the quiet, brooding object of his affections, whose sexuality remains a big question mark. This quiet, sensitive romance makes us even more in love with love."--Entertainment Weekly"A tone of authentic tenderness and yearning, completely without artifice, suffuses Reed's engaging Appalachian tale of high-school gay love. A romantic coming-of-age struggle that succeeds on many levels."--BOOKLIST

Truman Reid confronted his mom, Patsy, in the kitchen. Early morning sun streamed in brightly through the kitchen window over the sink, making Truman long for the relative freedom of summer that was about to be put to rest that very day.

Patsy glowered at him from the stove where she was scrambling eggs. She didn’t often get up to make him breakfast, but Truman had figured—at least at first—that she was doing so because this was Truman’s first day back at school. He’d be a senior at Summitville High. First days of school had always been a source of high anxiety for Truman, who’d been bullied and teased mercilessly throughout almost the entire four years. But now Truman wondered if Patsy had risen early to fix bacon and eggs because she was hiding a man in her room. You know, to distract him. This wasn’t a usual experience for his mom, Truman was sure, and he wondered if he’d embarrassed her. But he couldn’t help but wonder how a man in her room might affect his exclusive hold on her. Would he still get her undivided attention, you know, if this was a “thing”?

Of course, Patsy, lovely, diminutive, with curly black hair and wide eyes, had every right to have a man in her room. Even if that man smelled of cigarettes and motor oil. But she didn’t have the right, Truman opined, to keep secrets from him. A mother should never keep secrets from her boy, right? Wasn’t that one of those unwritten laws?

“That may be. Or may not be,” Patsy said, giving the eggs one final push-around with a spatula before dumping them on a plate. She sighed and eyed him. “I have a right to my privacy. You don’t need to be privy to every detail of my life. I show you that respect and expect the same in return.”

She’s reading my mind. Again. “Oh, I didn’t mean to pry, Mama. I just wanted to say it’s okay if you did have a man sleep over. It’s not like I would mind. It’s not like we’re not both adults around here. We have separate bedrooms and separate lives.” Truman almost choked on the words.

Patsy set the plate of steaming eggs before him. Truman saw, to his delight, that the four pieces of bacon Patsy had fried up before the eggs were all for him.

Patsy smiled, but there was something just a tad bit evil in it. “Thank you, sweetie. I’m so glad to have your go-ahead if I want to whore around.” She chuckled and returned to the counter where she’d left her mug of coffee. She leaned against the counter, mug in hand, and took a sip. Patsy was all of thirty-four years old but looked at least ten years younger in the dappled morning light, and Truman felt a rush of love for her. The bond they had was kind of a you-and-me-against-the-world one. Truman felt he could say just about anything to Patsy, and he knew she felt the same; witness the “whore” comment. What kind of mother said that to her son?

Truman wasn’t sure, but he was glad he had one who did.

Besides, between raising him, which could be, um, challenging at times, and working at the Elite Diner in Summitville’s tiny downtown, she had little time for romance. Given that Truman’s father was still a mystery to him—and to Patsy—he assumed that, once upon a time, she did have her whoring-around days, but he’d seen little evidence of them.

Patsy answered the three questions in short order: “None of your business. No, you can’t. Yes. Very.” She took another sip of coffee and tightened the sash of her white chenille bathrobe. Truman noticed she was wearing a little makeup this morning—mascara, some blush, a hint of lip gloss. She hadn’t overdone it. Truman would say she looked “dewy” if she asked. “You need to eat up and get in the shower, young man. The bus will be here—” She turned to look at the wall clock on the soffit above the sink. “—in twenty minutes. I know you need your primping time.”

Truman dropped his fork to the table. “Seriously? Only twenty? Good Lord.” He wrapped his bacon up in a paper towel and headed for the single bathroom. Patsy blocked his way. “Since when do we leave our plates on the table? What? You think I’m your servant?”

“Mom!” Truman whined. “You know I need time to get ready. Please, please, please take care of it for me. I’ll love you forever!”

“Okay. This once. And sweetie, I’d thought loving me forever went without saying. But you cook and clean up tonight.”

Truman rushed to the bathroom, wondering if Patsy would use the time to sneak her man out of the house. Too bad the only window looked out on the backyard. It was frosted glass anyway.

He hoped his mom had found someone to love.

He hoped his mom hadn’t found someone to love.

It had been just the two of them for so long, Truman didn’t know if he could cope with someone else vying for Patsy’s affections. He felt a little sense of violation at the thought.

In the bathroom, Truman laid out on the counter all the stuff a boy would need to make a suitable senior-year debut: eyeliner, clear mascara, blush, and the lip gloss that added no extra color to his lips but made them shine.

He stepped into the shower after brushing, flossing, and exfoliating his face. 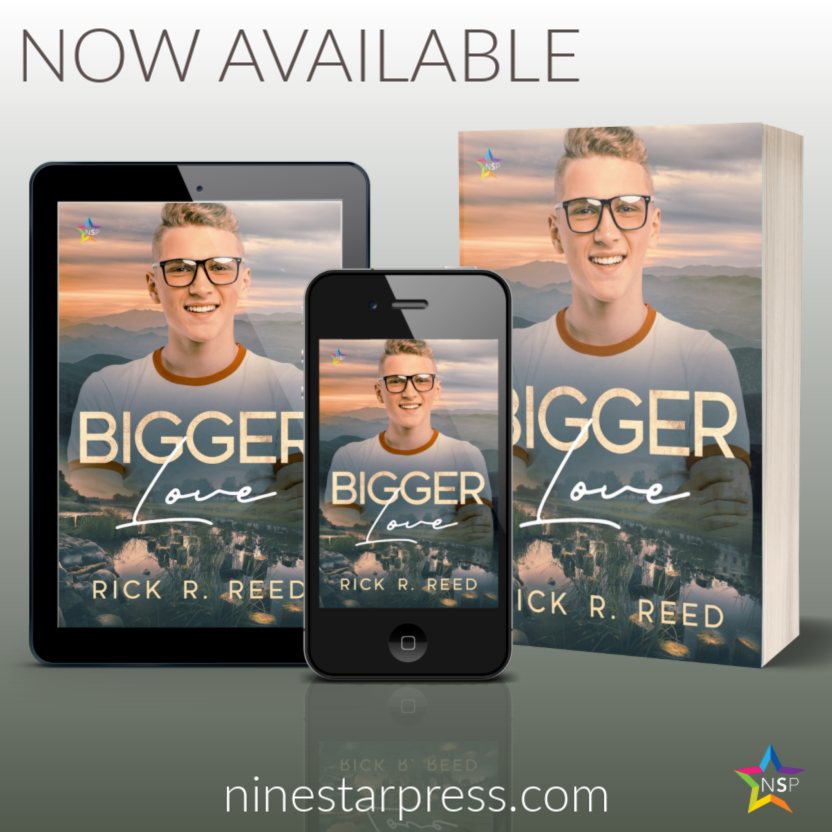